US Tax Reform – HR.1: Changes to the Alimony deduction

Public Law 115-97 (“HR.1”), commonly referred to as the 2017 Tax Reform Act (the “Act”), was signed into law by President Trump on December 22, 2017.  Several important changes included in HR.1 which affect individual taxpayers, including the repeal of the alimony deduction which was previously permitted under Internal Revenue Code (“IRC”) Section 215. The repeal of the alimony deduction is effective for separation and divorce instruments executed after December 31, 2018.

Currently, IRC Section 215 provides that an individual “shall be allowed as a deduction an amount equal to the alimony or separate maintenance payments paid during such individual’s taxable year.”  Payments of alimony must be reported as income on the recipient spouse’s income tax return. A payment is considered alimony if all of the following are met:

Similarly, when payments are made by a Canadian resident payor to a US resident recipient, Canada allows for zero withholding.  The reduction of withholding from a domestic statutory rate does not waive the obligation to report the payment on Form 1042-S or Form NR4, in the US and Canada, respectively.

Amounts paid in respect of child support are not to be included in the computation of taxable income of the recipient, nor is the payer entitled to a deduction in computing taxable income. 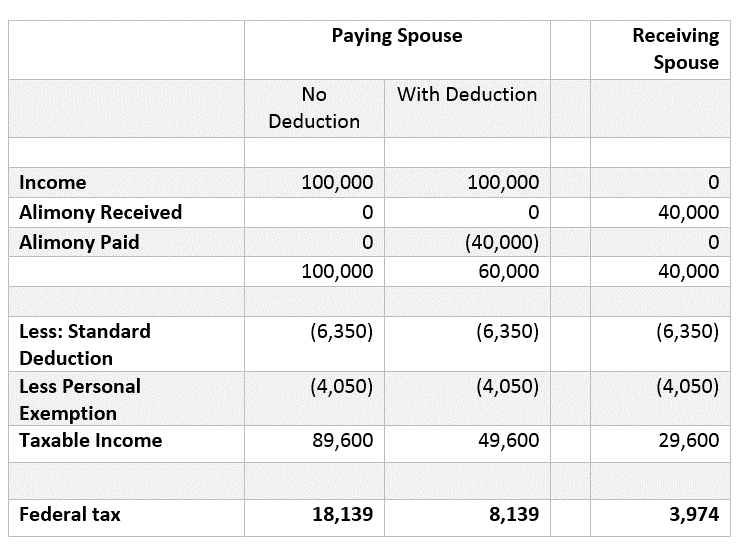 Alimony payments in Canada, known as support payments, attract similar treatment as the US.  Paragraph 56(1)(b) of the Income Tax Act (“ITA”), states that “there shall be included in computing the income of a taxpayer for taxation year, the total of all amounts each of which is an amount determined by the formula A-(B+C)”, where

B = Total of all amounts which is child support that became receivable by the taxpayer from the particular person under an agreement or order on or after its commencement date and before the end of the year, and

C = Total of all amounts each of which is a support amount received after 1996 by the taxpayer from the particular person and included in the taxpayer’s income for a preceding year.

Similar to the US rule, child support payments are not to be included in or deducted from income in computing taxable income.

Using the same example as above, however the couple is now resident in Canada (Ontario).  The result is a net tax savings to the couple of $8,168.

As of January 1, 2019, alimony payments, previously deductible under IRC §215, will no longer be deductible for US tax purposes where the separation or divorce instrument was executed after December 31, 2018.  Furthermore, IRC §61(a)(8) has also been repealed to exclude such payments from the recipient’s US gross income.

Applying the same example from above, using 2018 tax rates and considering the new alimony provisions pursuant to the 2017 Act, the US resident couple will now lose $5,740 [$15,410 – (6,500+3,170)] of net tax savings as the “splitting of income” is no longer available. The overall tax burden to the couple will be $15,410 as the payor spouse will not have the benefit of the deduction and the recipient spouse will not recognize alimony into income which previously was taxed at a lower rate. 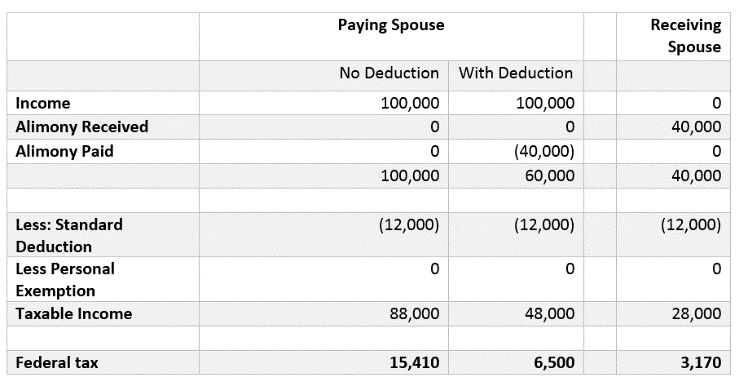 This situation becomes even more complicated when one of the spouses is a Canadian resident and is not a US person while the other one has a tax home in the US.  Let’s look at the same couple, but now, the paying spouse remains in the US, while the recipient spouse moves to Canada.   The domestic laws in Canada have not changed.  Therefore, the recipient of the alimony must include the payments as income on the Canadian tax return as discussed above.  This would mean that the same income is now taxed twice – once by the US where the alimony is not deductible and the second time by Canada where it is a taxable. This is not a fair result.

Does the US-Canada Income Tax Convention (1980) (“the Treaty”) provide relief? Paragraph XVIII(6) of the Treaty states the following,

(a) such amounts shall be taxable only in that other State;

(b) notwithstanding the provisions of subparagraph (a), the amount that would be excluded from taxable income in the first-mentioned State if the recipient were a resident thereof shall be exempt from taxation in that other State.”

Alimony payments made pursuant to divorce or separation agreements executed before December 31, 2018 will continue to receive the pre-2017 Act tax treatment.  However, if the existing agreement is modified post December 31, 2018, the payments will no longer be deductible by the US payer.  Furthermore, it will be important to establish where the “right to alimony” arose when the recipient is a resident of Canada, otherwise the result could be punitive.

Finally, the payer of alimony should provide his or her employer with an updated Form W4 Employee’s Withholding Allowance Certificate. Tax withholding from wages will increase as the alimony deduction will no longer be available for US tax purposes.

US Tax Reform – HR1 Changes to the Moving expense deduction

Q & A for Tax Season
Scroll to top